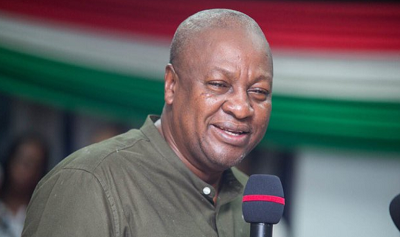 Former President John Dramani Mahama, the flagbearer of the National Democratic Congress (NDC), has indicated his willingness to construct a bridge over River Oti if voted back to power in 2020.

He said a feasibility study was done prior to the 2016 elections, but his government lost power and so he could not execute the project, adding that, he would fix the bridge to facilitate transportation in the Oti Region.
The former President said this during his tour of some districts and municipalities in the Region.
Mr Mahama, who was addressing hundreds of NDC supporters, also promised to build an ultra-modern market at Dambai, befitting the status of a regional capital.
He later presented two vehicles to the Oti Regional Executive of the NDC to facilitate the party’s activities and inaugurated a council of elders of the Party as well as the finance and political committees of the Party in Oti.

The rest are; research, communication, security, social welfare, conflict resolution, Zongo Caucus, youth wing, and women wing committees.
Mr Ofosu Ampofo, the National Chairman of the Party, called for unity in the Party and urged all unsuccessful parliamentary candidate aspirants and the parliamentary candidate to dissolve all camps and work together for victory in 2020.